Malcolm Fraser’s government advanced some important environmental policies. He was an early supporter of conservation efforts and was a founding member (along with Sir Garfield Barwick) of the Australian Conservation Foundation in the mid-1960s.

In 1980 the Fraser government accepted the World Conservation Strategy, an initiative of the International union for Conservation of Nature and Natural Resources, the World Wildlife Fund and the United Nations Environment Programme and over 700 scientists. One of the recommendations of the Strategy was the development of National Conservation Strategies, which was completed in Australian in 1983. The Fraser government also signed onto the Convention on International Trade in Endangered Species, the Ramsar Convention on wetlands, the Convention for Conservation on Antarctic Seals and the Japan-Australia Migratory Birds Agreement. They also initiated an inquiry leading to the banning of whaling in Australia.

Fraser refused to intervene to stop the  damming of the Franklin River because of his ideological commitment to state’s rights, also called cooperative federalism. He was also a supporter of uranium mining and export, although in later years he supporter international efforts at nuclear disarmament. 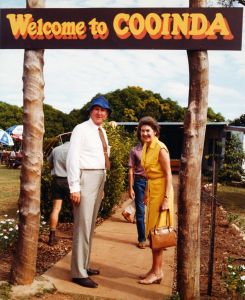 Image: Malcolm Fraser and Tamie Fraser at Cooinda in the Kakadu National Park during an official visit to the Northern Territory, 1982. Photographer: Australian Information Service. 2005.0104.00047